You are here: Home / About / Achievements

Christ the King students take the Iowa Test of Basic Skills Norm Referenced test each fall.  This test compares an individual student against other students also taking this particular test.  The ITBS test provides a longitudinal report that shows student growth from one year to the next. Most public school students in Arizona take the AIMS, which compares a student to a set of information.
The following graph shows the combination of all students in a grade level  and that they are testing above their grade level equivalency and above Diocesan norms. 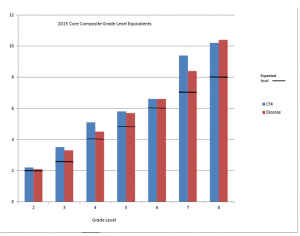 The longer a student attends CTK, the higher the achievement divide. 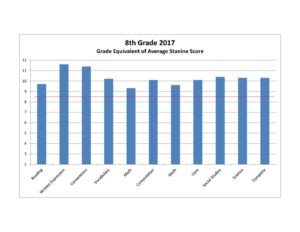 Why ITBS and not AIMS, Terra Nova, Stanford Nine or Ten?

Applicants my be more familiar with the Stanford Test used in public or charter schools.  Catholic Schools use ITBS.  These tests are normed and standardized tests.

When the ITBS scores say a child is in the 96th percentile, that means the child scores higher than 96% of the other students across the nation in the same grade that took that test.  A 96th percentile in Stanford would mean the same, but keep in mind that the population taking the ITBS and those taking the Stanford9 or Stanford10 are different.   All tests show a child’s strengths and focus areas, and that is what teachers need to know.  While these graphs show the aggregate scores of the class, the real purpose of testing to measure the growth of the individual child.  95% of the students make at least one years growth each year.

Christ the King also uses STAR Math and STAR Reading tests three times a year. STAR tests provide teachers with a tool to easily screen and monitor the progress of students. STAR Math comes with a screening tool that allows teachers to set goals and monitor a student’s progress as they move through the year. This allows teachers to quickly and accurately decide whether they need to change their approach with a particular student or continue doing what they are doing.

STAR Math has an extensive assessment bank that allows students to be assessed multiple times without seeing the same question. In addition the program adapts to the student as they answer questions. If a student is performing well, then the questions will increasingly become more difficult. If they are struggling the questions will become easier. The program will eventually zero in on the student’s correct level.

Ask us a question or send a message HERE